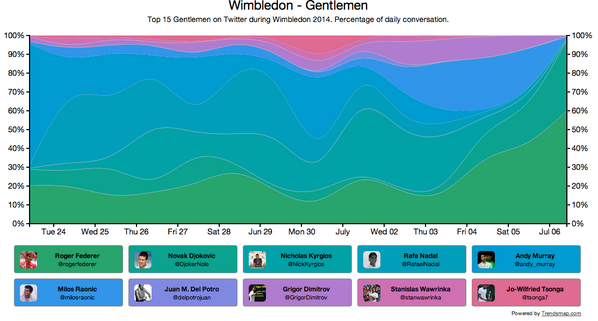 We just covered the Wimbledon Ladies‘ tournament, and here follows the equivalent for the Gentlemen’s.

The graph below shows the relative mentions 10 most mentioned Gentlemen over the 2 weeks of the tournament. There’s a key at below that graph, and you can also hover over any stream you’ll be able to see the person that relates to.

You can clearly see the rise of Australian Nick Kyrgios through the rounds, with the defeat of Rafael Nadal in the fourth round. Also in a similar fashion was the rise of Canadian Milos Raonic, who nearly joined his compatriot, Euginie Bouchard in becoming the first Canadians into a Wimbledon final.

Roger Federer’s support on Twitter was very strong throughout, and even though he didn’t win, he is clearly a crowd favourite, and at least beat Novak on Twitter.

Again we have created a visualisation showing the last week of activity for the finalists. Below you can see a heatmap of mentions around world, a chart showing the volumes over the week, and at the side we’re displaying the top tweets.

There are controls to change the speed or pause the animation, and you can also view at your own speed by using the sidebar to the right of the tweets.