Last week we had our biggest “viral” experience, and it was such an intense and fascinating experience that we thought we should document it. 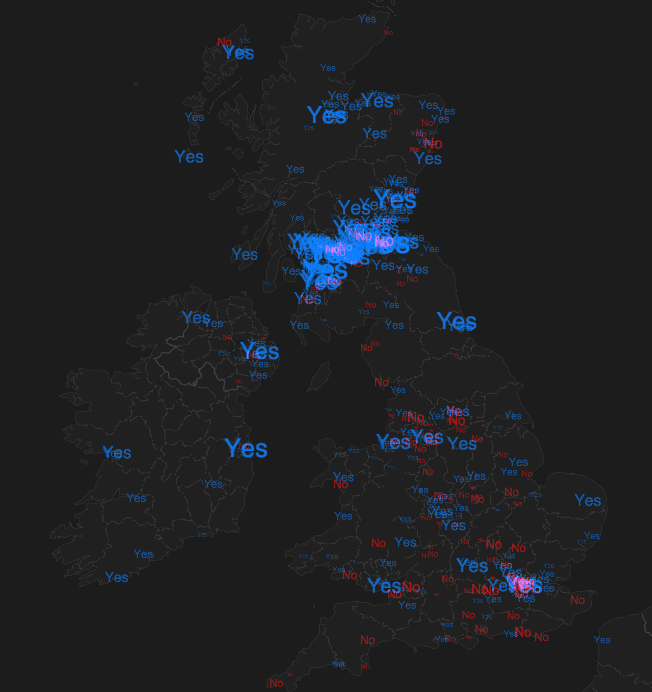 Last week we had our own most “viral” moment to date, and it was such an intense and fascinating experience that we thought we should document it.

In short we created a visualisation that wasn’t necessarily the best looking, innovative or enlightening one we have ever made, but through various factors it was viewed more than 270,000 times, 100 times as much as our typical visualisations are.

September 18th saw the Scottish Referendum finally come to vote. We had been watching the build-up on Twitter for some time so knew that the #Yes campaign was significantly more vocal, at least in Scotland, which was very much at odds with the Polls.

That same week we had added some new functionality to our visualisation tool which enabled displaying words rather than just bubbles, so we thought it could be a good opportunity to see how that looked for the #IndyRef.

We created a visualisation, focused on the UK, which illustrated the strengths of where Yes and No were most popular. We used the three most popular hashtags for each camp – #voteyes, #yesscotland, #voteyesscotland for Yes, and #voteno, #bettertogether, #nothanks for No.

You can see the visualisation here.

Sure enough it was very visually striking, particularly because how geographically diverse the Yes and No camps were. Scotland looked to be all Yes and England all No. It was also interesting to see so many Yes votes from around the world.

Words also worked well for this visualisation because they were short, and in this context it felt more emotive than circles.

We had also been working on the creation of animated GIFs for our visualisations so thought it a good opportunity to see how much they increased the visibility of our tweets.

From the moment we tweeted out the visualisation, we could see it was getting shared widely and quickly, much more than normal. Within about 30 minutes it was our most retweeted tweet, and we assumed it would tail off again quite quickly. Soon though it hit a new level which it sustained as it began to be shared in timezones that were waking up (particularly the east coast of the USA).

The earliest retweets and mentions were from passionate supporters from the Yes campaign, because it did appear to show a lot of support for them.

Many journalists and news organisations also helped spread it, because it did look like an interesting angle on a huge story. In the end we saw that it was embedded or linked to by sites such as The Scotsman, The Guardian, Daily Telegraph, El Pais, The Age, Zeit, El Pais, Buzzfeed, Mashable, Vox, Huffington Post, and Daily Kos.

For the next few hours we were caught up in a surreal world of seeing larger and larger waves of people mention it and view it. After seeing many great visualisations get resoundingly ignored, it was great to see one that got such great feedback.

Through Google Analytics and our site logs we could see how thousands of people were watching it simultaneously. Through Twitter’s own analytics we could see the tweet engagement, and we were tracking mentions of Trendsmap and the url of the visualisation through Twitter’s advanced search. We also used our own Trendsmap analytics to get more detail on who the biggest sharers were, where they were, and what words were being used to describe it. Fortunately it was mostly “cool”.

We then started getting tweets that Trendsmap itself was trending, from our trending alert accounts.

New to our #indyref site, @Trendsmap chart support for 'Yes' and 'No' camps: http://t.co/Sclv2PEK4n #IndyTS pic.twitter.com/CQUTco8Qhf

We had sent the original tweet at 10.35pm our time (we are based in Australia), so by 1am our adrenalin was running low, and we decided to call it a night.

We also wanted to be up early for the end of polling in just a few hours. Unfortunately this meant we missed the biggest tweet from none other than Alex Salmond himself, kicking off another big wave of interest.

When we got up a few hours later we saw that it had received over almost 200,000 views and was still going strong. Gradually interest faded as the results started to come in, which of course told a different story. When the final results were announced we then saw that the No mentions did in the come out on top in the end, and it becomes quite a poignant end to such a passionate campaign, as the No mentions finally mute the Yes.

And of course, there is a lesson that you cannot boil down the votes across a country to a few hashtags. Putting aside how representative Twitter can be, any group seeking change (Yes) will need to shout louder than those who were content to keep things going as they were (No).

There was a carefully co-ordinated campaign to tweet the hashtag #WithoutTheNHS at 8pm GMT on 8th September. 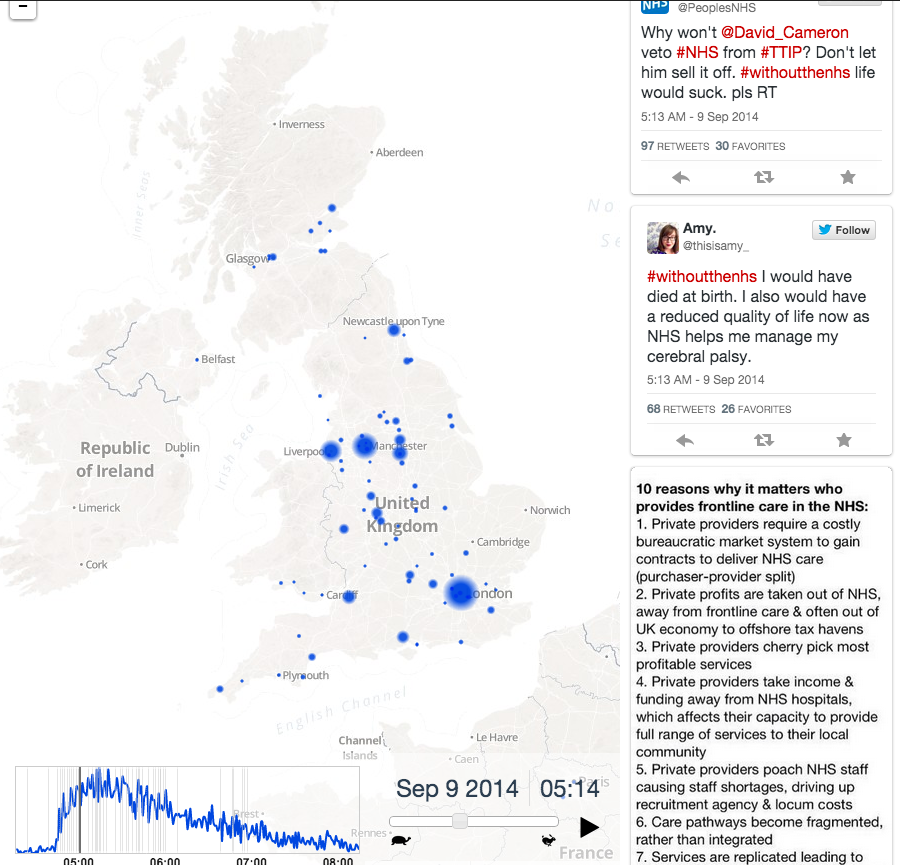 There was a carefully co-ordinated campaign to tweet the hashtag #WithoutTheNHS at 8pm GMT on 8th September.

We tracked over 32,000 tweets, and you can see below the vast majority of those were sent within the first hour.

The campaign was organised by @butnhs (Big Up The NHS) with the aim to highlight the great work the NHS (National Health Service) does in the UK.

It was very successful in becoming an official Twitter trend nationally in UK, plus 13 cities. It reached #2 nationally, in Hull and Stoke-on-Trent (or should that be Stoke-on-Trend?) You can see the full iTrended report here.