Whilst many have been focused on the games happening in Brazil, there has been another international tournament playing out in England – the pinnacle of Tennis, Wimbledon. This year saw the greatest interaction with Twitter yet, and in particular people getting behind the underdogs.

Whilst many have been focused on the games happening in Brazil, there has been another international tournament playing out in England – the pinnacle of Tennis, Wimbledon. This year saw the greatest interaction with Twitter yet, and in particular people getting behind the underdogs.

This was particularly obvious with Nick Kyrgios from Australia and Eugenie Bouchard from Canada. Both generating a huge amount of support, not just from their home countries, but across the globe.

We’ve used a couple of our new visualisation tools to get some insight into the discussion on Twitter over the two weeks of the tournament.

The graph below shows the percentage of mentions on a daily basis for the 10 most mentioned Ladies over the 2 weeks of the tournament. There’s a key at below that graph, and you can also hover over it to get more detail.

Particularly notable is how most of the early discussion centred around one of the favourites, Venus Williams, but that quickly tapered off when she was eliminated.

Discussion about Maria Sharapova has always been a big topic during grand slams, but in this case, even after she was eliminated, she kept rising due to the Sachin Tendulkar incident.

For the two finalists, Eugenie Bouchard may have been beaten in the final, but overall she had the most mentions of any Ladies’ player. Discussion about Eugenie grew steadily throughout the tournament, markedly more than the winner, Petra Kvitova. There was very little relative discussion about Kvitova until the final itself.

We also created a visualisation showing the last week of activity for the two finalists. Below you can see a heatmap of mentions around world, a chart showing the volumes over the week, and at the side we’re displaying the top tweets.

There are controls to change the speed or pause the animation, and you can also view at your own speed by using the sidebar to the right of the tweets. 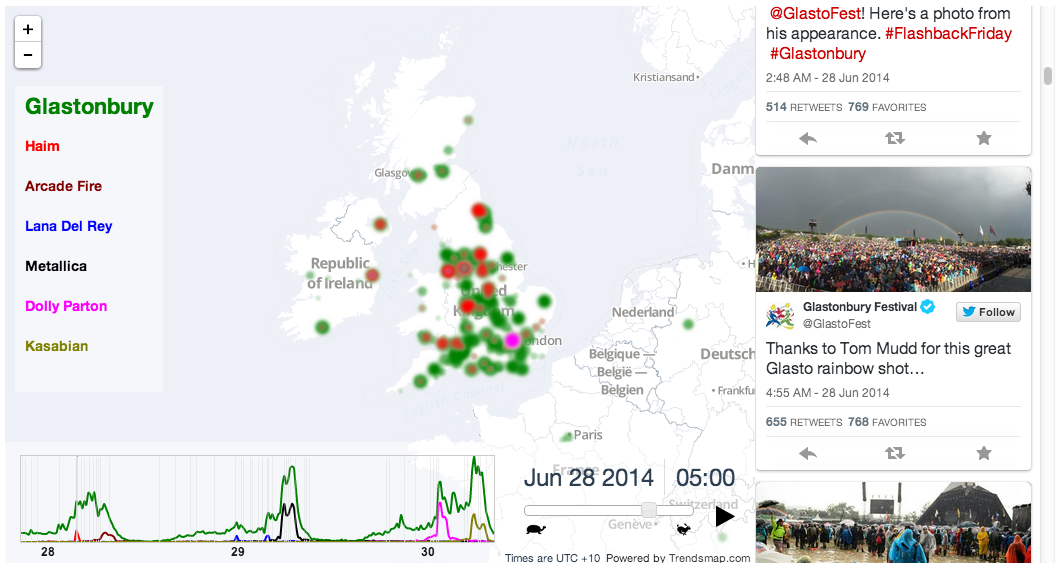 Glastonbury once again had a great line-up which helped distract from the soggy weather.

The gong goes to Metallica whose Saturday night performance even inspired a volume of tweets in the sign of the horns!

See the visualisation below for more detail and the top tweets over the weekend.

In case you missed it: Last week we showed how the excitement built up for Glastonbury.

With the World Cup Group Stage completed, it is a great time to look back over the last two weeks at how much has been discussed around the globe.

Below is one of our newer style visualisations we are trialling that shows the extent of the coverage over the last 2 weeks, a graph showing the peaks and troughs (it was a massive start!), along with some of the most popular tweets as time progresses. 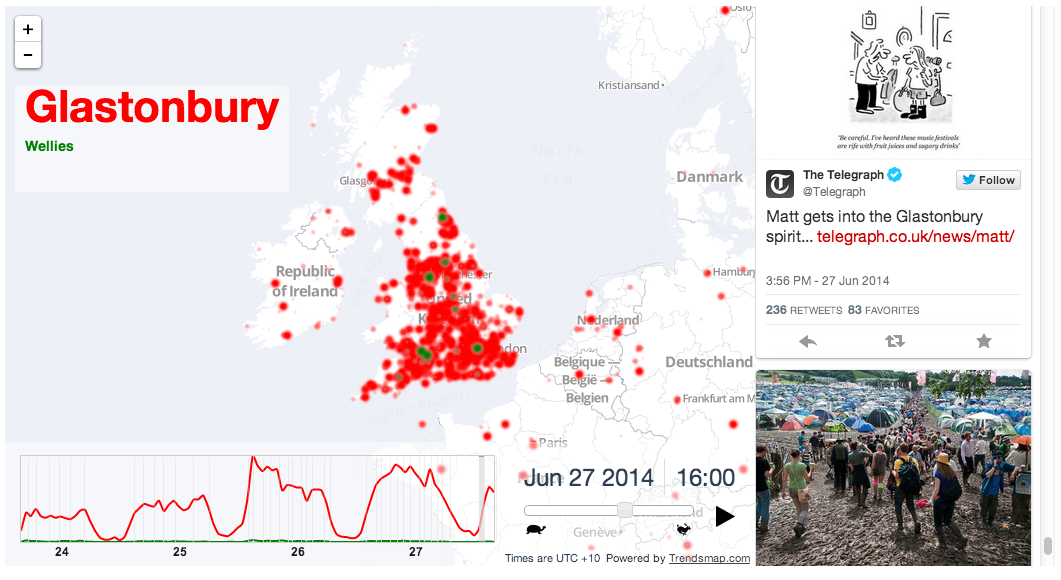 Glastonbury opened on Wednesday and the music stages start today.

We’ve been tracking the excitement build up this week, which you can see in our new style visualisation below.

This visualisation shows where people have been mentioning Glastonbury this week (and also mentioning they are packing their wellies).

At the bottom there’s also a chart showing the volumes over the week, and at the side we’re displaying the top tweets.

We are pleased to announce that you can now access historical trends, including associated images, videos, URLs, and tweets from the last 7 days in Trendsmap Plus.

Using the new control in the top left of the map, you can simply slide to any hour from the last 7 days, and the page will update with trends from that time.  You can also zoom & pan around the map as you normally would, while viewing trends through this special historical view.  To get back to the latest trends, simply move the slider back to the far right.

Also, in case you missed it last week, you can now filter trends by type, checkout this blog post for more information.

Please be sure to let us know if you have any queries, comments or feedback! 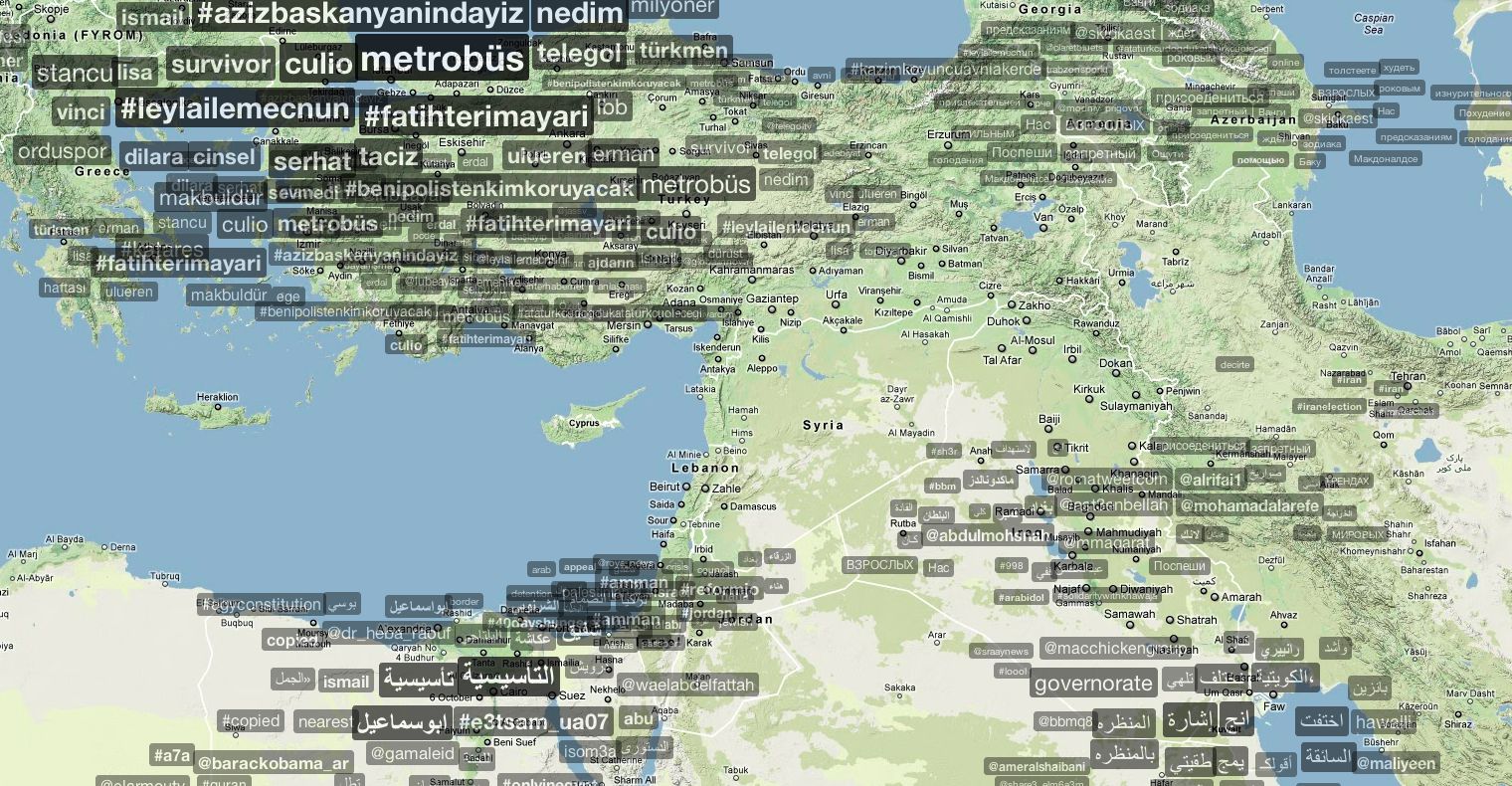 It’s been a while between updates but we have have spent that time teaching Trendsmap five more languages and launched more than 240 new location pages.

Trendsmap can now natively process Arabic, Turkish, Russian, Italian, and Swedish tweets in addition to the existing ones of English, Spanish, Portuguese, German, French, and Dutch.

This means we can now provide even more detailed and relevant trend information in areas where these languages are spoken.

We have already seen a big impact in the number of trending terms that Trendsmap displays  in the Middle East, Europe and Russia.

We have also added 244 new locations with their very own local page across the globe, mainly in areas where our improved language coverage such as the Middle East, Russia, and parts of Europe.

In the Middle East a number of important cities have been added including recent news hotspots such as Damascus in Syria and Tripoli in Libya, as well as a number of smaller, previously unlisted cities in the region.

For a full list of the over 1300 local pages we now have, please see our Locations Page.

We are now also doing more processing of data in areas where other languages are typically used.

This means that there is now a lot more hashtag and user trends in popular Twitter areas like South Korea and Japan.

This gives Trendsmap an even more detailed trend coverage across the globe than it has ever had.

As such we have had to grow as well in terms of the volume of tweets we are processing.

This means more trends, in more places as there are more tweets in areas where previously we wouldn’t have been able to extract a trend.

This increase has also allowed us to add in more locations, and we hope to continue to add more of these as possible. 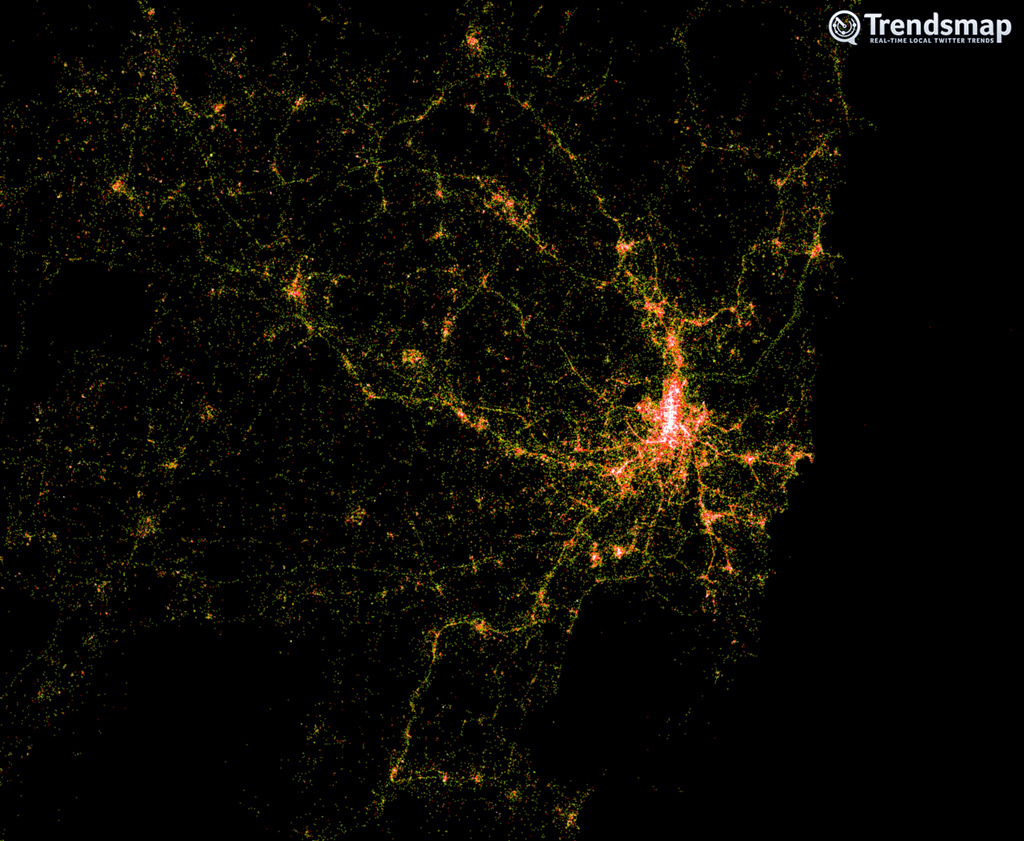 More Geo-tweet powered heat maps of cities around the world!

We have been having a bit of fun with Trendsmap over the past few weeks building visualisations out of geo-coded tweet data.

What is a geo-coded tweet? In basic terms, it is a tweet where the person has made available their precise location as part of the tweet. This is typically done using the GPS in many of today’s smart phones running twitter clients.

The images below show a heatmap representation of the density of geo-tweets across Melbourne, Australia.

More images to come, but next time we will not tell you which city is represented. You will have to guess!

Here you can see the distinctive outline of Port Phillip Bay as the ‘void’ in the middle, the city of Geelong to the bottom left.  The gridded road network is also just visible here, and more clearly the snake-like lines representing the metro train network.

END_OF_DOCUMENT_TOKEN_TO_BE_REPLACED

…no one would blame you for thinking that Google’s Gmail can be controlled by movement, Youtube is 100 years old, or that IKEA have made a high chair for dogs.

As Trendsmap shows us the interwebs were so abuzz with rumors, jokes and pranks that I’m sure even veterans of the internet had to think twice before writing off some ‘news’ as bogus… It was a crazy news day!

So,  all in all, it was a good day to pretty much ignore the news completely, or from a PR perspective, maybe it was a good time to get some bad news out in the public sphere as it was likely that no one would believe you anyway!

@Scobleizer even asked of his followers:

If anyone has dirt on me can you blog it tonight? @TechCrunch has an article that seems serious but I can’t tell for sure because it’s 4-1.

As we watched April Fools day unfold on twitter (via Trendsmap.com!) we diligently went about collecting all the top links and videos that people were talking about…

Below are some of these! Enjoy.

END_OF_DOCUMENT_TOKEN_TO_BE_REPLACED

Over that past few months we have been creating Trendsmap Twitter alerts via localised Twitter accounts. The reason we’ve done this is that we realised early on that the trends that matter the most are those that actually mean something to you.

The wonderful John Barratt has just made it even easier for you to follow your local Twitter trends.

However, if you just want to go straight to a list of links to the various Twitter Accounts, then go here.