Where @inafutureage is being talked about on Twitter around the world

Prison lawyer. Better living through prison abolition. There will be typos. RTs ≠ endorsements, but they sure are interesting, dontcha think? He/Him.

😂 The Seattle Police Department claims to be understaffed and under-resourced, but look at what they were able to cobble together tonight when a small group of non-violent protesters marched by their precinct 😂 pic.twitter.com/LH0iIwmmrm

This is why it’s so reprehensible to use the phrase “law and order” if you are a journalist. It is quite literally the opposite. Plus the word “fascism” is shorter.
David Gura
@davidgura
"He got hit on the knee with a canister of tear gas," President Trump says, of @AliVelshi, who was actually hit by a rubber bullet. "Wasn't it really a beautiful sight? It's called law and order." pic.twitter.com/sVvnZUft5B
712 3,176
· View on Twitter · Analyse

There is now a dance party behind the Justice Center. Crowds have gathered to watch and cheer. #PortlandProtests #pdxprotest #BlackLivesMatter pic.twitter.com/eEgw3wkSMz 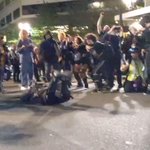 It shouldn't be notable that Portland Police complied with an order given by the police commissioner (who is also the mayor). But after police threatened to use tear gas at a protest last night, despite the mayor's ban, the mayor is now attempting to show he hasn't lost control.
Mayor Ted Wheeler
@tedwheeler
I’m confirming today that Portland Police abided by my order banning the use of tear gas for crowd control during a protest Friday night in the South Waterfront neighborhood.
34 124
· View on Twitter · Analyse
All Top Retweets
All Most Replied Tweets
All Most Influencing Tweets
All Recent Tweets
All Top Media
All Top Links
All Top Accounts
All Top Influencers
All Top Contributors
Contact
Pricing
Blog
Help
Register for Trendsmap Access
Login via Twitter to start your free trial now
Don't have a Twitter account? You can also register via Facebook
* Analytics, alert and visualisation tools require additional authorisation
Existing users can login


Our trial allows access to only the 8 hour timeframe for this page.

A Trendsmap Plus subscription provides full access to all available timeframes